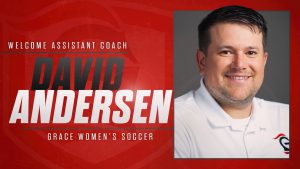 Andersen returns to Grace as a former soccer student-athlete, where he played for the Lancers from 2008-11.

“I’m very pleased that the Andersen family is moving to Winona Lake. David is an accomplished and experienced coach,” said Grace head coach Michael Voss. “He is very familiar with the NAIA and Grace and loves the mission of the college. He will bring a high level of competence. I’ve been working on him for years, and I’m excited to have a friend who knows me, Grace and exactly what we’re doing as a program.”

Andersen has a wealth of head coach experience, both at the high school and collegiate levels. He coached at his high school alma mater Oakland Christian (Mich.) where he experienced tremendous success as the head coach of the boys and girls’ soccer programs.

During his tenure from 2012-18, he racked up 111 wins. His teams won three conference championships as well as three district titles.

Andersen was named Coach of the Year three times at Oakland Christian. His players combined to win 21 All-State awards to go along with numerous All-Conference and All-District honors. Six players went on to play soccer at the collegiate level.

In 2017 he took the head coaching position for Rochester College (Mich.). After entering a situation with a lack of players, Andersen was able to bring in 35 players over his two seasons. Two of his players were named to the Wolverine-Hoosier Athletic Conference All-Newcomer Team, and one of his players signed a professional contract with the Philadelphia Fury (NISA).