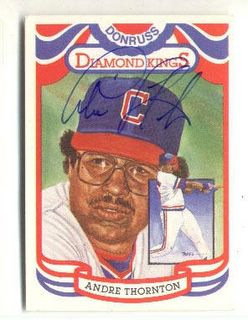 The September/October 2004 issue of FGBC World featured a story on Wifflefest (see archived issues on www.fgbcworld.com). The former Cleveland Indians star is well-known for his Christian testimony and for his testimony of faith following a tragic auto accident in 1977 in which his wife and three-year-old daughter were killed. Thornton and their four-year-old son survived the accident.

Here is an Ohio media report from this past weekend:

Former Cleveland Indians first baseman Andre Thornton came to Ashland over the weekend to be a part of Wifflefest ball tournament, hosted for the past six years by Southview Grace Brethren Church.

Not only did the former Tribe slugger throw out the first pitch of the tournament, he also came to town to pitch his testimony of faith, at a worship service held in Myer’s Memorial band shell in Brookside Park.

A two-time American League all-star with the Cleveland Indians, Thornton was used to delivering big hits when called upon. Now, he’s received another calling from a higher power, as he takes a mighty swing for the Word of God.

Thornton’s wife, Gail, also regularly accompanies him and uses her voice to sing songs of praise. Thornton resides in Chagrin Falls and is President and CEO of Global Promotions and incentives, doing business with many major corporations. Still, he says he always can find time to sign and autograph when requested.