Another Missionary Wedding in England 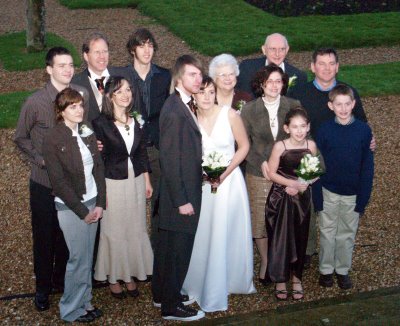 For the second time in six months, Grace Brethren missionaries David and Becky Schwan (couple second from left) have participated in the wedding of one of their children, their daughter Rachel.

The groom, Steve Williams, has a band which does evangelistic concerts and he also works as an information technician in a department store in Solihull. The couple met when she was singing for a charity banquet and his band was playing. They will live in Solihull.

The Schwans’ son, David, was married last July to the daughter of GBIM missionaries Dave and Susie Hobert. This past weekend their daughter, Rachel (center), was married in England, where the Schwans serve with GBIM.

Grandparents (back row in photo) are former GBIM executive director Tom Julien and his wife, Doris.