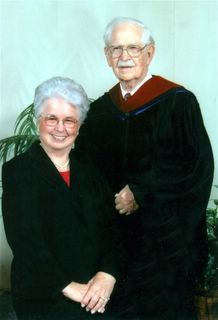 A delightful personal memoir of the late Archer Baum (pictured here with his wife, Eileen) is online by clicking here. Reproduced here is a brief section of that memoir:

Archer Baum Memoirs
“My Journey to Faith and Beyond”

During the early summer of 1939, I had gone to work for Mr. McMahan in his country grocery store and gas station where I was clerk, soda jerk, butcher, gas station attendant and janitor but mostly as a clerk behind the counter. I was 16 years old when I began.

I worked 6 days a week, 12 hours per day. I was paid $12/week. The store was closed on Sunday. I continued to go to Wapato, Washington High School during the school year. At this time I worked 37 hours/week. The school bus brought me to the store at 4:00 pm and I would work until 9:00 pm (or later).

Each Saturday I would work 12 hours/day. I have written the above that you may see that I had no time for sports (which I loved) nor any other kind of social life. I had no friends with which I could spend much time. At this time I never set foot in a church. It was a very lonely life.

Though I was happy in my job, I longed for companionship with other young people. At this time, my sister, Beth, was 15 years old. Unbeknownst to me, my parents had told her that she could not date boys without first asking their permission. A young boy named Bill Schilperoot (sp?) asked Beth to go with him to a 3-week revival meeting to be held at the Grace Brethren Church of Harrah, Washington. The meetings were from February 2nd to February 23rd, 1941.

Without asking our parents, my sister told Bill, “yes.” When told, my parents said, “no.” After much persuasion (and tears?), which I was not privy to, my parents relented and said she could go with Bill, only if they were accompanied by Archer (me). Glad to have an occasion to lord it over Beth, I agreed to be their chaperon.

Thus, I find myself sitting in the last row of the balcony of this little Brethren church. It is February 2, 1941. I do not remember the message. I only remember that the preacher seemed to be looking at and preaching to me only (not true of course). It is a little scary to me and I thought it to be unfair that he spent so much time looking at me.

It is February 23rd, 1941. It is the last night of 3 weeks of meetings. I was there on the first night but I have not returned until tonight. I did not like to be preached to and be looked at. I later learned that, after 3 weeks of meetings, not a single person had responded to the invitation to receive Christ.

The minister, Conrad Sandy, has preached his last sermon. I am sitting in the balcony, last row. God’s Holy Spirit has brought the conviction to my heart that I need to give my heart and life to Christ the Savior. The last hymn is being sung and with eyes full of tears, wearing shoes with leather heels and steel cleats, I clatter down the wooden stairs to the altar and give my heart to Christ. This is my spiritual birthday. Tomorrow I will be 18 years old.

My going forward seems to have broken a spiritual dam. About 20 others followed in my footsteps. I consider the decision to receive Christ to be the most important decision of my life. I have never regretted it.

Dedication to the Ministry

Exactly four weeks later, with others of our youth at Harrah, I attended a Christian Endeavor conference in Sunnyside, Washington. In response to a message by the president of Whitworth College, I dedicated my life to the service of Christ. After spending all summer working 60 hours/week in a fruit warehouse, I left home to enroll in Multnomah School of the Bible in Portland, Oregon.

Multnomah was only the beginning. After earning a diploma and marrying my lovely and beautiful wife, Eileen, we, still on our honeymoon, rode in a Pullman coach back to Winona Lake, Indiana where I spent a year as a student in Grace Theological Seminary.

In 1945 and 1946 I spent a year and a summer at Wheaton College in Wheaton, Illinois. I then transferred to Lewis and Clark College in Portland, Oregon, from which I was graduated with a B.A. degree in 1949.

After spending almost two years as pastor of Wishram Community Church in Washington, we (including Eileen and our two little girls, Rebecca and Colleen) returned to Grace Theological Seminary.

While a student at the Seminary, I was a student pastor at West Etna Community Church from 1950 until 1953 where I preached and taught the adult Sunday School class. Just as God had blessed our ministry at Wishram with converts, so He did at West Etna. I was among the first to use the baptistery in the then new McClain Hall.

After receiving a Master of Divinity degree from Seminary in 1953, our little family and I were called to the First Brethren Church of San Diego where I became its fifth pastor. Here we served for over 7 years. Today I have been given the title, “Pastor Emeritus” of the church.

Some day the silver cord will break,
And I no more, as now, shall sing.
But, Oh! the joy when I shall wake
Within the palace of the King.

Life’s evening sun is sinking low
A few more days (weeks, years) and I must go
To meet the Savior, God’s dear Son
Where there will be no setting sun.

After spending 59 years of study in philosophy, religion and Christianity, I am firmly convinced that in Christ we find truth and life.

With firm conviction, I can say with the apostle Paul, “For me to live is Christ and to die is gain. To be absent from the body is to be present with the Lord.”

Archer and Eileen Baum are celebrating 60 years of marriage on May 14, 2004. They met when they were students at Multnomah Bible College in Portland, Oregon, and married soon after. With Eileen’s support, Archer pursued his goal of becoming a Christian minister, as he graduated from Multnomah Bible College, Lewis and Clark College and received a Master of Divinity degree from Grace Theological Seminary.

Archer served the Lord as a pastor, an army chaplain and later in life as a public school teacher. Eileen worked with the Traveler’s Insurance Company. They continue to serve with the Gideon Bible organization.

Archer and Eileen have been godly role models to all who know and love them. They have provided a rich legacy. Proverbs 20:7 says, “But who can find a trustworthy man? A righteous man who walks in his integrity, how blessed are his children after him.”