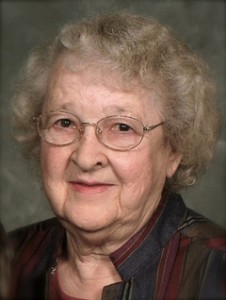 Arloeen French, wife of BMH author and former professor and pastor, the late Ivan French, died Sunday, May 25. Her obituary appears below.

She was a homemaker and the wife of Pastor Ivan H. French, who pastored Pleasant View Bible Church of Warsaw, Ind., from 1975-1992.

She received her Associates degree from Eastern Oregon State University, as well as her Bachelors of Theology from Northwest Christian University in Eugene, Ore.  She was active in the children’s ministry of her church, a member of the Seminary Wives Fellowship, and the Faculty Women’s Club of Grace College and Seminary in Winona Lake.

A graveside service will be conducted on Thursday, May 29, 2014 at 9:00 a.m. at Oakwood Cemetery of Warsaw and officiated by Pastor Mike Hontz.  Those wishing to attend… please meet at the funeral home by 8:50 a.m. to go in procession to the cemetery.

A memorial service will be held on June 7, 2014 at 10:30 a.m. at Grace Village Retirement Community, in the Grace Village Chapel, 337 Grace Village Drive, Winona Lake, Ind., and officiated by Pastor John French and Chaplain Bryan Benjamin.