Army Chaplain Shares About His Ministry 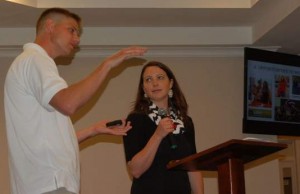 Capt. James D. Murray IV, left, speaks about his work as an Army chaplain at Grace Church of Aiken on Sunday. Murray is shown with his wife, Ashley, who also gave a brief talk during the presentation. (Aiken Standard photo)

The Aiken, S.C., Standard recently carried a story about Grace Brethren Army chaplain, Capt. James Murray, when he spoke at Grace Church, a Grace Brethren church in Aiken (Steve Taylor, pastor). Murray served as youth pastor at the church prior to entering the chaplaincy. A portion of the story appears below. Click here to read the complete article.

Capt. James D. Murray IV told the congregation of Grace Church of Aiken on Sunday evening that he leads a “blessed life” helping people with “so many needs” as an Army chaplain.

Murray is based at Fort Campbell in Kentucky.

He and his wife, Ashley, and their two children, 5-year-old Margo and infant JD, live in a house on the base.

“We can hear cannons and machine gunfire from our home,” Murray said.

Murray is assigned to the 3rd Battalion, 187th Infantry Regiment, whose members are known as the Iron Rakkasans.

He previously was in an aviation unit, and he served in Afghanistan in 2012 and 2013.