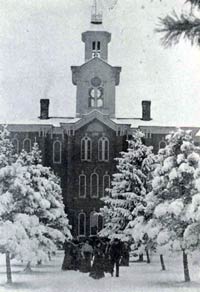 Trustees of Ashland University, a private Ohio college, have reversed their decision to hire only Christians and Jews as teachers and administrators.

Ashland University trustees agreed Monday to drop the hiring policy that they put in place last October. Instead, faculty members and administrators will be required only to express support for the school’s commitment to Judeo-Christian values.

The Brethren Church founded the college, located halfway between Cleveland and Columbus, in 1878. It’s not unusual for private schools to have hiring restrictions based upon religious faith.

Board chairman Emanuel Sandberg says trustees adopted the new hiring policy in October to clarify the school’s values But some faculty members became concerned that the new policy could exclude teachers who embody the school’s values but aren’t expressly Christian or Jewish.

Grace College and Seminary founders Alva J. McClain and Herman Hoyt were both Ashland faculty members who left the Ohio school over theological differences in the late 1930s.