From the Mansfield (OH) News Journal. This is an excerpt–to read the entire article click here. 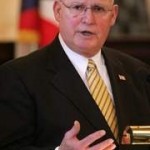 Republican respected for his business savvy

Political observers say following Harris will not be easy.

The Ohio Senate president moved to Ashland in 1977 after serving 23 years in the U.S. Marine Corps. He bought the local Chevrolet dealership in 1981 and operated it for 14 years, turning it into one of the first multi-GM model dealerships in the U.S.

In 1994, Harris was elected to his first term in the Ohio House of Representatives, where he eventually served as majority whip. He was appointed to the Ohio Senate in August 2000, elected to his first full term in 2002, chaired the Finance Committee from 2003 to 2005 and was first elected Senate president in 2005.

Business leaders say one of Harris’ biggest strengths is his knowledge of how businesses work and their importance to the community. One major accomplishment they pointed to was a 2005 revamping of the Ohio Tax Code for business.

“Prior to the change, Ohio ranked poorly in the U.S. and among neighboring states and was almost at the end of everyone’s ranking. That hurt efforts to retain business,” said Kevin Nestor, president of the Mansfield-Richland Area Chamber of Commerce. “Now Ohio is towards the top nationally and compared to neighboring states regarding business taxes.”

On the local level, civic leaders say Harris was involved in the effort to save the Ohio Air National Guard’s 179th Airlift Wing when the Pentagon wanted to close the Mansfield base a few years ago. Today the base has a new mission with new C-27J cargo planes. In fact, it is growing with the addition of a Rapid Engineer Deployable Heavy Operational Repair Squadron Engineers unit.

Evan Scurti, director of the Ashland Area Council for Economic Development, said Harris understands the government’s role in business development and supports the role of the Ohio Department of Development in setting the stage for economic growth.

“How businesses are treated is important,” Scurti said. “He’s gotten involved in several situations as an advocate for business growth and with introductions to business people.”

Scurti cited the opening of the new Barbasol shaving cream plant in Ashland as a good example of a public-private partnership. Harris worked with state and city officials to extend a new railroad spur into the Ashland Industrial Park to service the facility and several other undeveloped lots.

Ashland Mayor Glen Stewart said Harris also was instrumental in getting $1.5 million in loans and grants that allowed the city to buy the land and begin work on the park infrastructure.

“He always was able to give us directions getting any assistance we might need,” Stewart said. “He is just one fine gentleman.”

Harris also has worked closely with 3rd District State Rep. Ron Amstutz (R-Wooster) on issues of common interest. The two have shared portions of their districts over the years. Amstutz says Harris will be missed because the Senate tends to have strong personalities and needs stable leadership.

“He served in the Marines, so he has a strong personality but is not as authoritarian,” Amstutz said. “He will take people’s input but will weigh in when he needs to, and you can work with him when you need to get things done.”

One aspect of Harris that may not have been evident to the public was his Christian faith. For a number of years, he led a private voluntary prayer gathering in his office, Amstutz said.

Harris’ pastor, Rev. Dan Allan of Grace Brethren Church in Ashland, said the senator doesn’t just think of God on Sunday but sees his job as what he has been called to do.

“Bill clearly carries himself in a way that acknowledges the Lord’s help and that by God’s grace we’ll pull this off,” he said. “When he asks ‘How are you doing?’ you always feel it’s a genuine question.”