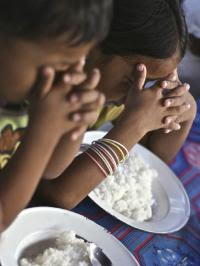 An article on Asia’s Hope, a cooperating agency with the FGBC, recently appeared in the Columbus, Ohio, Dispatch. Here is a short excerpt. To read the entire article, click here.

Some men calmly asked a revolting question: Would he like to have sex with a child?

The 2000 trip was a crash course for McCollum in the scourge of poverty and the sex-trafficking industry in Southeast Asia.

By then, McCollum and his wife had already adopted Chien, now 10, who is Vietnamese, and Pak, 9, who is Korean. They later adopted Xiudan, 3, who is Chinese. Their parents had either died or given them up.

“My heart was really broken,” said McCollum, 37, owner of Element, a Clintonville design firm. “I saw these little kids and thought, ‘These could be my kids.’ “

With no opportunities to make money, many of the girls orphaned in Cambodia and Thailand end up as sex slaves, McCollum said. Boys often are pulled in to help run the operation or deal drugs.

McCollum had grown interested in Asia while researching international adoption. He tagged along with Dave Atkins of Wooster, then a pastor, on a mission to Cambodia. Soon after, the two scribbled a mission statement on a napkin while sitting at a Denny’s restaurant in Mansfield. Asia’s Hope was born.

Today, the nonprofit group operates nine orphanages for 250 children in Cambodia and Thailand.