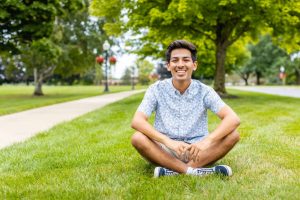 One student, David Amaya, from Goshen, Ind., credits his arrival at Grace this fall to several teachers, coaches and mentors who spoke into his life as a young man. Now, a freshman studying elementary education, it is his desire to provide the same encouragement and support to young men just like him.

Amaya’s early family life brought a lot of instability. He never had a relationship with his dad, and for the first four years of his life, Amaya lived in his uncle’s basement with his mom and his older brother. By the time Amaya was 16, he and his brother lived on their own.

For most of his life, Amaya thought he would graduate from high school and work at a factory. He had no plans of going to college. But that changed in eighth grade when Amaya was introduced to Mr. Utly, a community volunteer at his school.

Amaya and Utly met every week during his study block, where Utly would check in on him and hold him accountable for his grades. “After I started meeting with Mr. Utly, my grades started going up,” said Amaya. “I started thinking about my future for the first time. Before that, I didn’t care. But Mr. Utly motivated me,” he said.

Those half-hour weekly meetings with Utly left an indelible mark on Amaya.

“Meeting him changed my whole future to this point,” said Amaya. “If I hadn’t met him, I don’t think I would want to be a teacher.”

And ever since then, Amaya has had a vision and a dream to work toward.

Amaya heard about Grace College from Jonny Mora, one of his soccer teammates at Northridge High School in Middlebury, Ind. When Amaya was a sophomore, Mora was the impressive senior who scored a game-winning goal in sectionals.

“At Northridge, there are not a lot of Hispanics, so Jonny was my first Hispanic role model,” he said.

Mora was the reason Amaya wanted to attend Grace. But it was Tracy Martin that made attending Grace a reality for Amaya.

Amaya was paired with Martin, an elementary school teacher at Jefferson Elementary in Goshen, Ind., through the work-based learning program at his high school. Not only did Martin expose Amaya to a career in elementary education, but she also played an influential role in helping Amaya prepare for college.

“Tracy volunteered her personal time to take me on my Grace visit, and she helped me with my FAFSA application since my mom doesn’t know English,” recalled Amaya. “She checks in on me frequently to this day,” he said.

Thanks to the influence of many supportive mentors in his life, Amaya is beginning his freshman year at Grace. Amaya looks forward, recognizing he would not be where he is today without the investment of positive role models.

“It was hard to find motivation and support growing up,” said Amaya. “Without my dad, I didn’t have any male Latino role models. So I want to help kids who are in the same situation I was in. I want to give them praise and support so that they can succeed in their lives,” he said.

After he graduates from Grace, Amaya plans to continue his education and get his master’s in education.

Amaya’s financial aid package at Grace relieved the burden of college costs so that he can make his big dreams a reality. Grace College provides significant financial aid for students. In fact, nearly 25 percent of its incoming students are attending Grace tuition-free through a combination of federal, state and institutional aid.