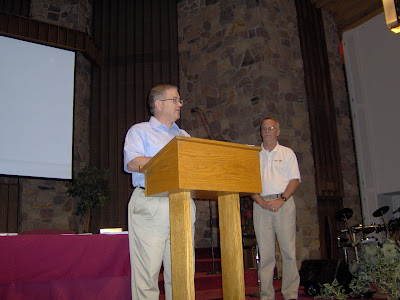 More than 300 Grace Brethren pastors met in the sanctuary of the Winona Lake (IN) Grace Brethren Church this afternoon for the Association of Grace Brethren Ministers (AGBM) annual meeting. In addition to routine business, three members were selected for special honor.

Dr. David Plaster (at podium), newly-called pastor of the Columbus, Ohio, church, was given the Excellence in Ministry award. He recently concluded several decades of ministry teaching and administrating at Grace College & Seminary. Dr. Ken Bickel of the seminary faculty read the commendation for Plaster.

Joel Richards, current president of the AGBM and pastor at the LaLoma Grace Brethren Church in Modesto, California, is at right.

The Pastor of the Year Award was given to Pastor Rick Nuzum of the Grace Brethren Church of Powell, Ohio. Jim Custer read the commendation and Pastor Nuzum’s history, which included NFL experience with the Los Angeles Rams, Green Bay Packers, and New York Giants as a player.

The Powell church under his leadership for the past 12 years has started three new churches, supports 23 missionaries, and has continued with a strong ministry in the Columbus area. Nuzum was unable to attend because of the sudden heart attack and death of a parishioner.

Jack Churchill, longtime Grace Brethren missionary to Argentina and to Mexico, was honored with the Lifetime Achievement Award. Churchill, 85, was also unable to attend the ceremony due to health concerns.

The AGBM meeting was the first event in a week-long national conference for the Fellowship of Grace Brethren Churches. Tonight’s session at 7 p.m. will be in the new $9.1 million Orthopaedics Capital Center on the Grace campus and will feature business meetings of the FGBC, Brethren Missionary Herald Company, and Grace College & Seminary. An Open House and dedication of the new OCC facility will follow.

For more information and schedule for the week, log onto www.fgbc.org.