Authentic Resolve Must Be Visible 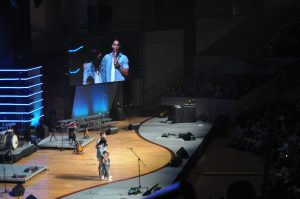 Davey Blackburn introduces his wife, Kristi, and children to the Momentum audience.

The former student-athlete and professional football player recounted his growing up years in the ghetto.

“I’m proud of where I came from,” he said, “but I hate every minute of the experience.”

Raised by a single mother, he remembered days with no food in the refrigerator, washing up in the school bathroom because there was no water at home, being sexually abused by his Sunday school teacher at 10, and not knowing anyone in his father’s family until he was 12.

“I was born into the struggle, I never felt I had a voice,” he stressed.

At 14, his mother asked him to be the “man of the house.” He didn’t know what that meant, other than he was caring for his little sister. That was the year he also decided to commit suicide until the words painted on an Orlando wall came to mind and Jesus grabbed his heart.

The words, “Go against the flow,” were based on Romans 12:2 — “Be not conformed to this world, but be transformed.”

He says he began to consider, “Could it be true that Jesus could save anyone from anything? I was so distracted by the hypocrites in the church that I didn’t give any thought to the church. Could it be true?”

“If its true, if God raised Jesus from the dead, that means he can raise you from any situation,” he told the students who were gathered in Chapel Auditorium at Indiana Wesleyan University.

He recounted how the high school football coach approached him about playing the sport, something he’d never been interested in. Encouraged because he could get a scholarship if he applied himself in the classroom and on the field, he went to a Fellowship of Christian Athletes camp that summer. It was there that his counselor looked him square in the eyes and said, “Don’t you know God has a plan?”

“After salvation, I was still just waiting to die,” Shep admitted. “I had no idea that God had a plan for me on the earth.”

“It’s my desire that every kid in every ‘hood hears the gospel of Jesus Christ and that God has a plan for their life,” he said. “If you don’t live it, you won’t believe it.”

Also on Friday morning, Davey Blackburn returned to the Momentum platform to recount how God is the perfect storyteller. He talked about how Christ died on the cross and rose on a Sunday.

Last year, he had shared how gunmen had entered his home 18 months earlier and shot his wife, while their young son was in his crib upstairs.

On Friday, he recounted the weeks following her death, how he and his wife and had a dream of connecting their congregation with an inner-city neighborhood. He was led to meet with a pastor from that neighborhood, who challenged him to not only forgive the young men who murdered his wife, but to consider their families.

“In that moment, I knew God was doing something,” God calling [my church] to partner with this church.”

Along the way, he met Kristi, who also had a connection to that same inner city neighborhood. The two married in December.

Friday afternoon activities were altered some due to rainstorms that passed through the region. At tonight’s main session, Keith Minier, pastor of Grace Fellowship, Pickerington, Ohio, is the speaker. The session may be watched online at livestream.com/mo18/events/8276003