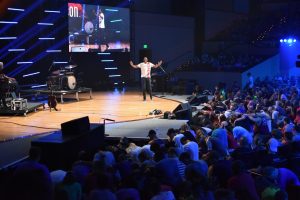 At age 11 he was selling drugs. By age 17 he spent one year in jail. Now he’s visited every continent to share his testimony.

Dimas Salaberrios, author of Street God, now a major motion picture, spoke to the Momentum audience about his journey from the streets to God and back to the streets of New York.

Salaberrios is the president of a diverse group of pastors, Concerts of Prayer. He is also the co-pastor of Infinity Bible Church which he helped plant in the Bronx River Housing Projects in New York.

“Jesus, I’ll quit (selling hard drugs),” he said after spending a day with three women praying over him-praying God would deliver him from evil. Immediately, he stopped selling hard drugs and switched to marijuana. “I was confused…a lot of people are confused,” he said of new Christians.

After giving his life fully to Christ, Salaberrios had a gun placed to his head. He prayed, “Jesus you have to save me or I’m dead.” The gun did not work that day.

“With Jesus your life is never hopeless,” he told the Momentum students.

When Salaberrios turned himself in for escaping years earlier from his parole officer, he told the judge he did it because he was going to follow Jesus whether is was in or out of jail. The judge dismissed the charges against him. 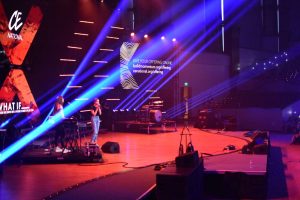 One student sings and another plays piano during the offering.

Before Salabarrios took the stage, Jeff Bogue announced a special offering for CE National’s new “What If” campaign. He encouraged not only monetary gifts, but also for churches to consider partnering with the project. The project asks what if 5,000 people pooled resources for reviving churches and raising up the next generation.