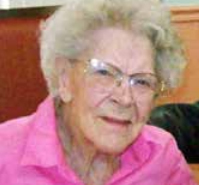 Word has been received of the death of Ava Schnittjer Beard Lamar. She taught speech at Grace College and served as the Dean of Women there in the 1950s and 1960s. Her obituary appears below.

Ava Beard Lamar (nee Schnittjer) was born to Eternal Life on Friday, July 18, 2014. She was born in 1914, in Delhi, Iowa, where she grew up on a large farm as the fifth in line among five brothers and one sister. Along with the rest of her siblings, Ava graduated from Delhi High School, and maintained contact with her former classmates throughout her entire life.

Mrs. Beard Lamar devoted her life to the pursuit and expansion of education, as both a student and as an accomplished teacher with a distinguished career that spanned both secondary and higher education. Upon her graduation from Cornell College in Mt. Vernon, Iowa, she taught high school English and speech in Iowa, and then, while teaching, completed her Masters at the University of Iowa from their famed Writer’s Workshop. During this time, she wrote and produced several short films that received critical praise. During WW II, she stopped teaching for a year to serve with the American Red Cross, and then later, after the War, took another year off to attend Grace Theological Seminary in Winona Lake, Indiana. Following her seminary studies, she accepted a position at Grace College and Theological Seminary where she taught speech and served as Dean of Women. An accomplished pianist, she also represented the College by traveling nation-wide to churches, delivering speeches, and performing with the girls’ quartet and the college choir. During this time, she also served as the national president of the Christian Association of Deans of Women and edited their publication.

In 1963, she married Burrus E. Beard, a widower who had been her former employer as the superintendent of schools during her early years of teaching in Iowa. The Beards settled in Daytona Beach where Ava then taught at Daytona Beach Community College for 15 years and also served as Chairperson of the Department of English. In addition, the couple created and ran the popular “Daytona Beach Tourist Club” where Ava introduced the speakers.

After Mr. Beard’s death in 1985, Ava continued to run this popular series, in his stead, at the Peabody Auditorium for a number of years. When Ava retired from DBCC, she then worked for fifteen years with the Habitat for Humanity organization, serving as Chair of the Family Selections Committee, where she was proud of the fact that she helped numerous families to earn and to have a home of their own. Her outreach to the people of Daytona Beach included the Bridge the Gap program, as well as a number of other community serving initiatives, and led to recognition from the Daytona Beach City Council.

Shortly after their arrival in Daytona Beach, the Beards had become members of, and had served the Seabreeze United Church of Christ in many capacities. During her almost 50 years of membership at Seabreeze, Ava chaired the church council three times, served on numerous boards, and sang in the church choir.

In 1991, Ava married Jim Lamar, who was also a member of Seabreeze Church. Mr. Lamar died in September 2004 after an illness that encompassed most of their married life. In her later years, Ava became a resident of Bishop’s Glen where she taught their weekly Bible study for many years, and was also an active participant in their residential life.

Mrs. Beard Lamar is survived by a loving step-daughter, two adoring granddaughters, three loving great-grandchildren, and an entire community of wonderful Schnittjer nieces and nephews. In addition, she also leaves behind extended family in the important relationships she developed with both her associates in service, as well as her caregivers.

Ava Beard Lamar’s legacy to all is her constant faith in God and the importance of the study of His Word. Services will be held at Seabreeze United Church of Christ on Saturday, July 26 at 1:00 p.m. with private interment at Volusia Memorial. Condolences may be shared with the family at www.lohman funeralhomes.com. Arrangements are under the careful direction of Lohman Funeral Home Ormond.