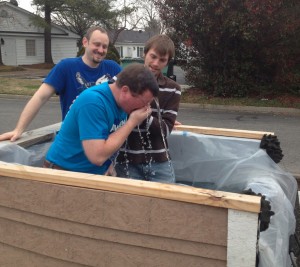 One of the leaders at Awaken Church, Jon Walker, baptizing co-worker Scott Christopher he had invited and seen come to Jesus. Pastor Michael Pumphrey looks on.

An email today celebrates the three-year anniversary for Awaken Church, a Grace Brethren congregation in the Hampton Roads area of Norfolk and Virginia Beach, Va. Pastor Michael Pumphrey shares the story of the church, which began when he and his wife, Connie, and their family moved to the area to specifically begin a new church. A portion of the story appears below. Click here to read the complete story and see the photos.

Though I have never went sky diving you could say that I did use a parachute, well sort of.  You see they actually term Awaken as a Parachute Drop Church Plant, and that was rush enough!  The term is  in comparison to a soldier dropping behind enemy lines into a new and strange area.  In Church Planting World a parachute drop actually has the lowest survival rate of any church plant, with less than 20% making it.  Many factors we faced made this true; having no local network built; not having a local sending church to parent us along and the need to learn a new culture.  I mean after all pop is no longer pop down here like it is in North East Ohio… it is soda!  In all seriousness culture can be a huge learning curve.  With these factors having Awaken just celebrate 3 years this past month is a huge milestone and miracle of God.

Click here to read the complete story and see the photos.