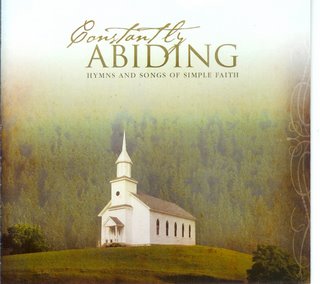 A new Compact Disc by the Sam Baer family of the Victory Mountain Brethren Chapel in Hyden, Kentucky, presents purchasers with a great opportunity to be of unique help to the Lord’s work. And, there is a wonderful human-interest story behind the album.

“Constantly Abiding: Hymns and Songs of Simple Faith” is the title of the album, which includes 14 songs, including the title tune. Vocals are by Sam, Betty, Sophia, and Sonya Baer. Piano accompaniment is by Betty Baer, with spots of sweet a cappella harmony and an occasional obbligato on trumpet by Sam.

Repertoire ranges from old public-domain favorites such as “It Could Happen at Any Moment” to southern gospel songs by Mosie Lister and Ray Boltz to “There is a Redeemer” by Keith Green. It also includes a “bonus track” original composition by Sonya Baer entitled “Living for God’s Smile Alone.”

Nestled in the rural hills of southeastern Kentucky is Victory Mountain Grace Brethren Chapel, a small country church with big heart. Part of the Fellowship of Grace Brethren Churches, Victory currently serves a congregation of 45 and provides a number of programs to meet their needs as well as those of the surrounding community.

In August of 1950, Evelyn Fuqua came to Dryhill, KY. She moved in next to Ted and Sally Begley along the riverbank of the Kentucky Middle Fork River. The Brethren Home Missions Council (now Grace Brethren North American Missions) helped Evelyn buy property for $500. A dedication ceremony was held on Oct. 4, 1953, for the newly-built church. Ms. Evelyn started many ministries, including a Friday night boys club. She served until 1965, when Pastor Marvin and Dixie Lowery came to serve. [EDITOR’S NOTE: The story of Evelyn Fuqua is available in Heroes Who Live On, Vol. 2, by Robert Cover, Sr. and Viki Rife, available from BMH Books at www.bmhbooks.com]

Marvin Lowery was called the “Laugh Man” for his hearty laugh. The Lowerys served faithfully for 11 years. John and Jenny Sholley came in 1976 and served four years. John was a good doctrinal Bible teacher and was responsible for creating the “Brethren Bunch,” a traveling youth singing group. Pastor Sam and Betty Baer arrived March 15, 1979, and have served to the present. The Baers have six children who helped extensively with the church work.

Married 36 years, Six Children
Pastor Sam Baer is a graduate of Lancaster Bible College and Grace Seminary. His wife, Betty, is a graduate of Harrisburg Hospital School of Nursing. They have been married for 36 years.

Bambie, their eldest, is married to Mark Getz. They have five children and currently live in Benton Harbor, Michigan, near Mark’s hometown. Sam, the second-born, is married to Jessica, and they live in Wheaton, IL where he works for Baer Homes, Caleb’s construction company.

Mike, child number three, is married to Lisa. They have three children and live in Westerville, Ohio, where Mike works for Mike Cheeseman Builders. They attend Powell Grace Brethren Church.

Sophia and Sonya are fourth-born and are identical twins. Sophia lives at home in Dryhill, KY, with Sam and Betty, but leaves frequently for ministries in Michigan where she works with the Hispanic migrant workers teaching English as a second language and witnessing through day camps for children. She plans to be a full-time missionary. Sonya is a graduate of Southland Bible College with a major in Biblical Studies and Missions. She is currently living at home with Sam and Betty but, Lord willing, will be attending language school in Texas where she hopes to study Bible translation.

Caleb is the youngest of the children and is married to Jill. They live in Wheaton, IL, where Caleb owns a construction business, Baer Homes. He takes many short-term mission trips to foreign countries using his construction knowledge to serve people there while bringing them the gospel.

Executive Producer Explains
Pastor Steve Makofka from the Centerville, Ohio, Grace Brethren Church, served as executive producer for the album. He shares some of the “back story” of the album this way:

“Few decisions are harder to make than the decision to discontinue funding for a church. GBNAM had already discontinued their financial support for Victory Mountain GBC and now we were facing the same decision at the district level. The principles of good stewardship wouldn’t allow us to continue using church-planting funds for a 50-year-old church, and we didn’t have a mechanism for providing ongoing support to a ‘mission’ church with special needs.

“Mark Saunders, pastor of First Grace Brethren Church of Dayton, and I went to Dryhill to discuss these things with the Baers. We loved them and loved their work. We realized it would always be dependent on others for financial support, but where would the money come from?

“We shared a pleasant morning of prayer and conversation, and then sat down with the Baer family for lunch. Before we ate, Sam asked if his family could sing the blessing for us, like they usually do. I remembered that years ago I had heard the girls sing, but that memory did not prepare me for the sheer joy of listening to God’s name being praised by the strong, clear voices and simple mountain harmonies the Baer family lifted to God that day. As soon as they sang, ‘Amen,’ my mind started racing.

“I asked Sam if they had ever considered recording their family singing together. He answered that they had been encouraged to do so by Pastor Mike Wingfield and others. ‘Sam,’ I said, ‘You have to record this. People will want to hear it and you could sell the CD’s to help raise funds for the ministry.’

“It’s taken about two years and lots of work, but I think the final product is well worth the effort. I think everybody in the entire FGBC family should purchase a copy. The musical style has the same feel as the Grammy-winning ‘O Brother, Where Art Thou?’ soundtrack. The songs are both old and new. The production is elegant in its simplicity. The family’s joy and the depth of their faith is unmistakable.

“I find that listening to the CD is soothing, inspiring, and uplifting, partially because the music is just plain good, and partially because I know the family, their faith, and their ministry. Anytime I can buy good music and support a cause at the same time, I’ll do it. I encourage everyone I know to do the same.”

Gladys Deloe will have copies of the CD for sale at Celebrate06. More information about The Baers and Victory Mountain Chapel, including much of the background material in this article, is available at www.victorymountaingbc.com.