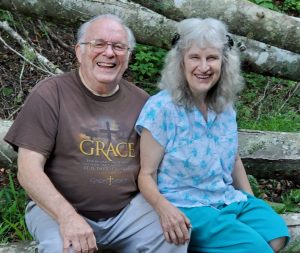 A lot has happened along the banks of Hell For Certain Creek in Dryhill, Ky., in the past 40 years, but one thing has remained the same—the faithfulness of Sam and Betty Baer—until now.

During the week of Thanksgiving 2019, the couple concluded their ministry at Victory Mountain Grace Brethren Chapel, and they prepared to move to Oklahoma to be near their daughter, Bambie, and her family.

Sam and Betty arrived in the hills of Eastern Kentucky in early 1979 after serving as the associate pastor at the Grace Brethren Church in St. Petersburg, Fla. Sam became the third pastor to lead the ministry—which began in the 1950s under the leadership of Evelyn Fuqua. (Previous pastors included Marvin Lowrey and John Sholly.)

His first Sunday was March 15, and the couple served faithfully until November 24, 2019, when they were honored by the congregation with a special meal. The local ministerium, the Leslie County Ministerial and Christian Workers Assn., also recognized them for their work in the Confluence and Dryhill areas.

The ministry was never easy. In an area of Appalachia that is often identified as one of the poorest regions of the country, high unemployment, coupled with alcohol and drug abuse, continues to be a problem.

Sam and Betty Ann Baer found a niche in loving and serving people. “We just believed in helping people,” he said. “The Lord sent people our way who needed help.”

The entire Baer Family gathered for the wedding of their daughter, Sophia, and Chris Berger, on May 12, 2018.

With each person who crossed their path, they regularly shared the gospel. As they took a break from packing, their conversation was sprinkled with stories of people who came to know the Lord – from the mother of a 14-year-old girl in their congregation who recently accepted Christ, to well-known people like Tim Couch, the All-American football standout from University of Kentucky who grew up in nearby Hyden, Ky. (population approximately 250).

Baer got to know Couch during his days as a stringer for the local newspaper in Hyden. It was one of several things that Sam did to put food on the table as the church often was more mission point than self-sustaining ministry. The gig allowed Sam to attend the NFL draft in 1999 when the local football star was picked in the first round by the Cleveland Browns. (Larry Chamberlain, then the executive director of Grace Brethren North American Missions, encouraged Sam to make the trip.)

Their six children grew up in the shadow of the church. (Literally, as the house stands on the same property as the church building.) Sam recalls how a few of the children would ride their bikes around the community on Saturday afternoon to invite people to church. “The kids were a blessing,” he remembers, noting that it was an eventful day when each received a drivers’ license, allowing them to drive on their afternoon visits in the surrounding neighborhoods. Later, as each one turned 18, they took on the responsibility of driving routes in cars or vans to pick up people for the church services.

Although the church building was located in Dryhill, Betty faithfully prayed for seven of the communities around them. Often the people whom they picked up for church came from these areas.

Sam says it was a highlight when volunteer groups came to serve. Numerous teams helped with construction projects throughout the years. Without that assistance, facility updates and building repairs would never have happened, he adds.

The family would work alongside the men and women who came to help. In fact, he credits the men who came with helping teach his sons the trade. All three now live in the Chicago area, where two of them operate their own construction businesses.

In addition to their daughter in Oklahoma, a daughter lives in the Bronx and another in southwest Michigan.

Editor’s Note: This story first appeared in the Winter 2020 issue of GraceConnect magazine. Click here for your complimentary subscription to this quarterly publication.