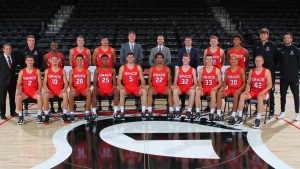 For the first time in 42 years, someone new will be leading Grace’s men’s basketball team.

Scott Moore will handle his first game as head coach of the Lancers on Friday, taking the reins from retired NAIA Hall of Famer Jim Kessler. Moore was grateful for the lessons learned under Kessler’s tutelage and looked forward to imprinting his own style at the helm of the program.

“Learning how to lead is a lifelong process. I’ve been coaching people for a long time, and that’s what this is,” Moore said. “You’re teaching basketball but ultimately coaching people. Coach [Kessler] taught us that you have to love your players first. The foundation of this program isn’t changing from that.”

Moore will be blessed with a wealth of returning talent. Although Grace lost its leading scorer and rebounder in graduated forward Logan Godfrey (19.1 points, 9.0 rebounds per game), the Lancers still bring back the next eight leading scorers from 2018-19.

Haden Deaton erupted last season to the tune of 18.9 points, 4.9 rebounds and 2.5 assists per game. The rugged wing, now in his junior season, was named to the Crossroads League Preseason All-League Team, an honor belonging to the top 10 players in the league as voted on by the coaches.

Deaton and Warner will be counted on to carry much of the scoring. “Charlie is one of the best shooters in the country, and Haden will be big in scoring and rebounding for us. We expect close to 20 [points] each night from them, and both guys have potential to be First Team All-League players,” Moore said.

Grace also brings back three more players with starting experience, including sophomore Eddie Gill IV and seniors Jaret Sons and Braxton Linville. Gill has developed into one of the premier wing defenders in the Crossroads League, and Moore believes that “he truly has potential to become the best defensive player at our level in the country.”

Linville passed out 166 assists last year and is poised to reach 500 career assists during his senior season. The point guard has started consistently since coming to campus and brings a steady hand to Grace’s offense.

Sons averaged a career-best 5.1 rebounds per game last season to go along with 8.8 points per contest. Sons will need to rebound well again in 2019-20 and figures to play at both the power forward and center positions during the year. Moore was pleased with Sons’s growth over the summer and relayed his importance to Grace’s team this year.

The Lancers will receive a major boost with the return of Matt Jennings. The speedy guard received a medical redshirt last year. As a freshman in 2017-18, Jennings averaged 13.2 points per game. Jennings’s ability to score and to create for his teammates will add a dynamic aspect to Grace’s lineup.

Martin Schiele is one of the team’s vocal leaders. The ultra-quick guard shot a career-high 40 percent on his 3-point attempts last year, and he averaged 11.0 points per game during the 2019 NCCAA National Championships.

Cody Holmes, David Holden and Sam Miller have also grown over the offseason and add depth and experience to Grace’s bench.

Moore brought in five freshmen to this year’s roster, two of which (Jakob Gibbs and Cade Gibbs, Plainfield HS) will redshirt the year.

Myles Johnson was an accomplished homeschool product, leading his team to the homeschool national championship while being named National Player of the Year himself. The 6-foot-6 forward plays with confidence, can rebound effectively and has the scoring potential to “win us games,” in Moore’s words.

Caleb Brown is a raw 6-foot-7 post player from Broad Ripple High School. The freshman is skilled with the ability to shoot from the outside and score in the paint. He has “the chance to be special,” according to Moore. “We won’t rush him, but we look for him to be a contributor sooner rather than later.”

Hank Smith is a younger brother of former Lancer guard Elliot Smith. Like his older brother, Hank is a relentless worker who could become an important “3 and D” wing with his long-range shooting and athletic defending.

“Elliot was one of the hardest-working players we ever had until Hank showed up,” Moore said. “Hank does everything you want as a coach. He’s going to play so hard that he will push our older guys or simply take their spot. That’s what you want from your freshmen. He’s been our biggest surprise of the preseason so far. People will want to come out and watch him compete.”

The Lancers will not have an easy road in the always-challenging Crossroads League; five teams are ranked in the NAIA’s Preseason Top 25 Poll, and the league has produced five national champions in the past decade. But Moore was confident this group would be up for the challenge.

“We have tremendous leadership on the floor this year, which has made the preseason very smooth. In many ways, our five seniors are like coaches to our younger guys,” Moore said. “Our guys are starting to learn how to come together for the team’s success. We will compete hard every day in practice and will continue to focus on getting one percent better each week. If we can accomplish that, by February and March we will be a tough team to beat.”

Grace opens it season at home with the Lancer Tipoff Classic on Friday and Saturday at the Manahan Orthopaedic Capital Center. Grace faces Lincoln Christian at 8 p.m. on Friday and Northwestern Ohio at 11 a.m. on Saturday.