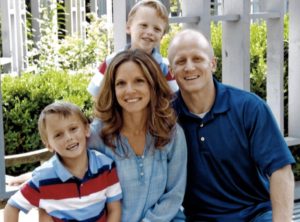 Beau and Stacey Stanley and family

Beau Stanley has been named senior pastor at East Side Grace Brethren Church, Blacklick, Ohio. He begins his role on August 1. A special celebration will be held at 10 a.m.,  August 5 in the gymnasium to reflect on God’s past faithfulness to the church and their trust in his continued working into the future.

Grace Polaris will host a farewell reception for the couple following morning services on July 15 in the church’s Family Center Commons.

Beau has been part of the senior staff team at Grace Polaris Church (Mike Yoder, lead pastor), as their training and spiritual growth pastor. He also serves as the lead coordinator of the North Center District of Charis Fellowship and the vice president of the board of directors of GraceConnect, the publishing and communications arm of the Fellowship.

He and his wife, Stacey, grew up in the Columbus area and were married in 2001. Both have been involved with the Grace Polaris Church for most of their lives.

Beau has a master of divinity degree from Phoenix Seminary in Arizona and has also attended Trinity Evangelical Divinity School. Prior to that he studied commerce at the University of Virginia and worked in the financial industry, including a role as an investment banking analyst for Goldman Sachs in New York.

Beau joined the Grace Polaris staff in 2007, where he was licensed in 2008 as a pastor in the Charis Fellowship (formerly Fellowship of Grace Brethren Churches) and ordained in 2011.