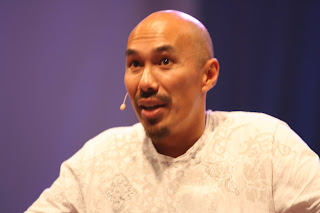 Chan, the pastor of Cornerstone Community Church in Simi Valley, Calif., talked about the faith of Elijah and of Gideon in the face of seemingly insurmountable circumstances. “Elijah was a man just like us,” he said, quoting James 5:17. “Have faith,” he concluded, encouraging the audience of nearly 2,000 students and adults to believe that God can do big things. “These people were nothing,” he added, referring to Elijah, Gideon, and others mentioned in Hebrews 11.

As he wound down the evening, he noted that he felt like God was already working in some people’s lives. He extended an invitation for individuals to come forward, kneel, and talk to God. Young people streamed down the aisle, ending up on their knees at the front of Jeremiah Chapel in the Dixon Ministry Center. At the end of the evening, there were 134 decisions to follow Jesus.

The evening opened with the Operation Barnabas choir, testimonies from Momentum West, and worship led by Aaron Shust. Shust is filling in for Steve Fee, whose infant son had surgery today. Shust, probably best known for his song “My Savior My God,” released his debut album, Whispered & Shouted, in 2007.

Fee will join the conference later this week.