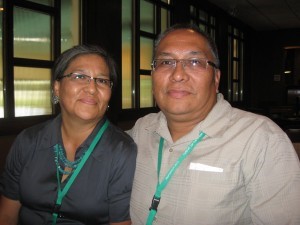 Under his ministry, Lee Trujillo gave his heart to Christ.

Then John Trujillo, who was conducting a revival/camp meeting led a young 25-year-old married-with-two-children Native American to the Lord.

That young Native American, Arnold Betony, is now a Bible college graduate and a pastor himself, as well as American Indian Church Planting Director for GO2 Church Planting ministries.

Arnold and his wife, Bessie, are this week attending the Grace Brethren national conference in Cincinnati, and today they sat down with BMH to share a bit of their background and ministries.

Arnold and Bessie met while they were both high school students in Tuba City, Arizona, and they married right out of high school. Arnold went to work as a construction worker/carpenter and they began their family, which now includes five adult children and six grandchildren.

Bessie became a believer about a week before Arnold committed his life to the Lord, and eventually a representative from Indian Bible College in Flagstaff visited the Red Lake Grace Brethren Church. Arnold, who had no intention of becoming a pastor or a preacher, decided God wanted him to know more about the Bible, so, having recently been laid off from his job, he enrolled for further Bible study.

Graduating after four years with a bachelor’s degree in biblical studies, Betoney moved his young family back to Red Lake where he began a six-year career as an alcohol and drug counselor. Eventually Pastor John Trujillo recruited him to be the youth pastor at the church and, in 1993, associate pastor.

In 1996 Arnold replaced John Trujillo as senior pastor of the Red Lake church and he pastored for a number of years before feeling the call to join Andy Moyer and Steve Galegor in a church-planting effort in Albuquerque, New Mexico.

Betoney now pastors the Native New Life Church on the south side of Albuquerque, where he describes the residents as “a melting pot of ethnic cultures.”  His congregation is largely Native American, although there are some mixed marriages, and many who attend are single parents and young people.

Betoney encourages prayers for the Native American ministries, saying that he’s glad the Grace Brethren “hasn’t given up on native ministry.” He said, “We covet your prayers and support.”

Bessie’s primary ministry is rug-weaving, a skill she learned as a child. Many women in the church desire to learn the skill, so a number of years ago Bessie began to build small looms and offer classes. The first time she offered a class, 16 women signed up.

As he seeks to train young Native Americans for ministry leadership in the future, Betoney indicates a need for prayer and financial support from the Grace Brethren family. More information is available at www.Go2ChurchPlanting.org and Betoney may be reached at abetoney@juno.com.  Gifts of financial support should be channeled through Go2 Church Planting ministries.