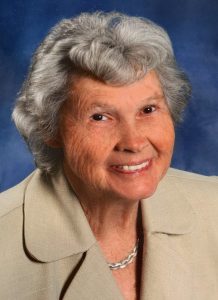 Betty Ruth Hocking was born on September 11, 1931, in Miami, Fla., to Joseph and Estella Reeves. She graduated into the presence of her Lord on October 16, 2019, in Long Beach, Calif.

Betty graduated from Ponce de Leon High School in Coral Gables, Fla., and then attended Bob Jones University where she met her husband, Donald. After graduating in May of ‘53, Don and Betty were married on June 5.

Betty spent most of her life as a missionary working in the countries of Central African Republic and Cameroon. While in the CAR, she worked with both young girls and older women in various programs. She and Don would take their sons out on trips to put on camps for the local boys and girls at various churches. She supported the local church in Mbaiki, CAR, until they moved to the Bata station where she helped train women in the Bible Institute and Seminary. After moving to Cameroon, Betty utilized both her teaching and organizational skills as she help Don establish the Cameroon Biblical Seminary. Don and Betty completed 55 years of ministry in Africa before dementia began to erode Betty’s memory and abilities.

Betty is survived by three sons and their wives (Jim and Faye, Dan and Beth, Tom and Tami), as well as their informally-adopted Cameroonian daughter, Sylvianne, and her husband, Joseph Ela. She was blessed with 22 grandchildren, and 33 great grandchildren.

She was preceded in death by her parents, Joe and Estella; her husband, Don; a son and daughter-in-law, David and Susan; her sister, Joanne Thames; two grandchildren; and one great grandchild.

A memorial service will be held at 11 a.m. on November 16, 2019, at Bellflower Brethren Church [9405 Flower Street, Bellflower, CA 90706] followed by a lunch reception in the fellowship hall.