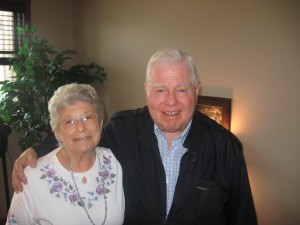 Mary Elizabeth “Betty” Miller, 82, of Flintstone, Georgia, and wife of longtime Grace Brethren pastor Carl Miller, went home to be with her Lord on Tuesday, July 20, 2010.  She was a native of Saskatchewan, Canada, born an identical twin to the late Virgil and Mary Bingaman on December 19, 1927.

During her teenage years, Betty and her sister sang regularly on the Sunday School of the Air radio show in Canada.  Betty graduated from Bob Jones University in 1950.  She was a school teacher and principal for 25 years, and served as a minister’s wife from 1951-1996.  She lived in Flintstone since 1997 where she was a member of the Chattanooga Valley Baptist Church and the Young at Heart Seniors Group.  She was a prayer warrior, seamstress, baker, and known for her notes of encouragement.

She was preceded in death by her son, Larry Carl; two half brothers, Harold and Kenneth; and stepmother, Adeline Semrau.

Memories and condolences may be sent to www.lane-southcrestchapel.com for a Memories Book.  Contributions may be made to GBCanada USA, P.O. Box 836, Charlotte Hall, MD 20622.

Memorial services will be held Saturday, August 14, 2010 at 10:30 a.m. at the Chattanooga Valley Baptist Church with Reverend Dwayne Boudreaux officiating.

Arrangements are by the South Crest Chapel of Lane Funeral Home and Crematory, Rossville.