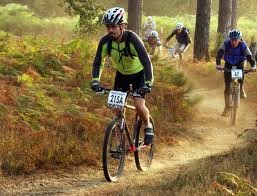 Nocturnal II includes a ten-mile mountain bike trail race starting at 4 p.m.  Within this race there are three divisions: Expert, Sport, and Beginner. Following that race, a 5K Evening Trail Race will start at 6 p.m. with divisions broken down by gender and age group.  Finally, for the truly adventurous, the Ridiculous Race will start at 7:30 p.m. and is completely in the dark.  Racers are encouraged to compete in teams and each team needs one bike.

Prizes will be given for best costume (bikers and runners), coolest bike, and first place for each race.  Anyone who competes and finishes all three races will be entered to win a cash prize of $500.

Immediately following the Ridiculous Race there will be a night bike parade through Winona Lake and all the racers will get to be a part of a surprise act of kindness. There will also be a bonfire and cookout at Miller Field on the Grace campus.

A U.S. Marine will be at Nocturnal II collecting for Toys for Tots. The mission of the U.S. Marine Corps Reserve Toys for Tots Program is to collect new, unwrapped toys during October, November and December each year, and distribute those toys as Christmas gifts to needy children in the community in which the campaign is conducted.

For more information on Nocturnal II: Military Edition, and to register for the event, visit www.grace.edu/nocturnal.