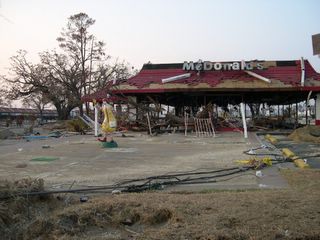 We arrived safely in Mobile at 7:30 Sunday night. Mitch and Ben had gone down to Biloxi over the weekend to scout things out and indicated that the need was incredible there so we decided Monday morning we would head down to Biloxi.

While we were having morning devotions and prayer, Jack got a call from a lady who had a tree in her yard and on her daughter’s shed. So we decided we would go ahead and take care of her and then head down.

As we were cutting these trees, a neighbor approached and asked if we would help a friend of his, Pearl Singleton, who was confined to a wheelchair and had a tree down. So we went there and while there got several more contacts and didn’t get started to Biloxi until 5:30.

Biloxi is organized chaos. We are staying in a dance studio and are being provided for by the Southern Baptist Convention. But Biloxi is in ruins–everything from the Beach in a half-mile is all but completely destroyed. The stoplights are gone in about the whole town and most restaurants are closed. I have never seen such complete destruction.

We got to the second job in Biloxi and there were 27 trees to cut up. We asked the man with the trees if he thought his neighbor would mind us cutting in her yard he said they didn’t speak. So our group prayed for mending of their relationship and then we went and asked her if we could cut the trees that fell from this neighbor’s yard and clean up her trees.

She said OK–we were at this location all day. Before we left we got both neighbors together with our group and prayed together. After the prayer the neighbors shook hands and thanked each other. We really believe God put us there today to assist in the softening of their hearts. We will continue to pray for their relationship.

Team devotion time has been really good. The guys are really getting to know each other in a much more intimate way. They have been very impacted by the gratefulness and thankfulness of the people in the midst of having lost so much. They are not bitter, but thankful for what they still have, and that has been very powerful.

We are having an opportunity to ask these people and their neighbors how we can pray for them. Praying with them and again for them in team time has been an incredible experience.

Our presence freaks people out sometimes. We have been called “Blue Angels.” We had a person break down in tears when we showed up because he just could not believe that people would give up a week to drive 16 hours and come help him.

We were very moved by that. We just told him it’s not us, it’s Jesus that lives in us that gives us the strength. He led us to his house, he cried again, and then invited us to come back Wednesday night for a chicken BBQ.

A couple of the unsaved members of the group have had a chance to have a couple of very good conversations with some team members. Please pray that God will pierce through and they will make a decision for Him very soon.