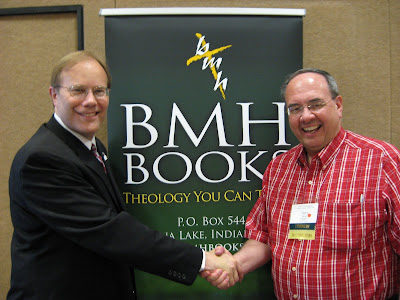 YIB (Your Intrepid Blogger) has been in Eugene, Oregon, this week participating in the 2008 annual convention of IFCA International, a group of independent churches and mission agencies. The executive director of IFCA, Dr. Les Lofquist (shown at left, with BMH Books publisher Terry White) is a graduate of both Grace College and Grace Theological Seminary.

The main speaker for the convention has been Alex Montoya, senior pastor of the First Fundamental Bible Church of Monterey Park, California, who was led to the Lord in Calexico, California, through the influence of Grace Brethren missionaries who were conducting border missions there.

Montoya’s church, which has about 900 members, has a strong church-planting emphasis and has begun 15 daughter churches. Montoya, who has also been associate professor of pastoral ministries at the Master’s Seminary, preached a series of four stirring, practical messages on church-planting, based on scriptural teaching and his experience. (Russell Berger photo)