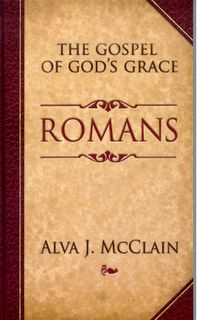 Romans: The Gospel of God’s Grace by Dr. Alva J. McClain has just been reissued by BMH Books in a new “facelift” updated format.

The 253-page paperback consists of commentary on the Book of Romans culled from 40 years of teaching notes and edited by Herman A. Hoyt, who succeeded McClain as the president of Grace College and Seminary in Winona Lake, Indiana.

In the foreword to the book, Hoyt points out that McClain first delivered a series of expository messages on the epistle to the Romans in the closing year of McClain’s five-year pastorate at the First Brethren Church of Philadelphia, Pennsylvania.

Then for more than 40 years he delivered essentially the same series to his students at the seminary. McClain outlines Romans in four main sections, each of which deals with a specific subject, answers a great question, and presents a clear revelation of God.

McClain, who died in 1968, taught at the Philadelphia School of the Bible, the Bible Institute of Los Angeles, Ashland College, and Ashland Theological Seminary, where he also served as dean.

In 1937 he directed the fouding of Grace Theological Seminary, where he served as president and professor of Christian theology until his retirement. He was a member of the Scofield Reference Bible Revision Committee, a member of Phi Beta Kappa, and a charter member of the Evangelical Theological Society.