The Brethren Missionary Herald Company said farewell to Terry White this afternoon with a reception at Tree of Life Bookstore, located next to the BMH offices in Winona Lake, Ind. 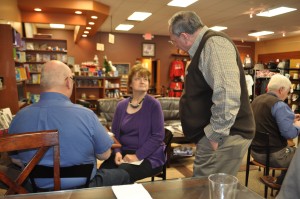 Due to a restructuring of the ministries of BMH, Terry  will no longer be a regular part of the BMH staff.

He has been a vital part of the day-to-day operations of the Brethren Missionary Herald Company (BMH) since 2003. His departure from our staff is a result of a restructuring of the ministries of BMH, which is focusing more on digital media projects in the future. I am pleased to note, however, that he’ll continue to work with BMH on an as-needed basis.

Terry was appointed executive director in October of 2003 and oversaw the re-birth and re-creation of the ministry of BMH, which had all but ceased operations in the previous decade. He led the development of a periodical for the Fellowship of Grace Brethren Churches (FGBC World) and established a regular on-line news presence for the FGBC – the BMH Editor’s Blog. He re-instituted BMH Books as a Grace Brethren ministry in 2005 after initiating its purchase from STL, which had bought the company in 2001. Since then, he has been responsible for the development of 45 book projects, including one he is currently writing on the history of Winona Lake, Ind. He has represented BMH and the Fellowship of Grace Brethren Churches on the Brethren Encyclopedia Board, including helping to plan world conferences of the Brethren in Schwarzenau, Germany, in 2008, and Brookville, Ohio, which is scheduled for 2013.

Terry, who received an Ed.D. degree in Organizational Leadership from Indiana Wesleyan University this summer, will continue to teach at Grace College and will be teaching at several other colleges in northern Indiana. He and his wife, Sharon, reside in Winona Lake.

Photos from the event are posted on the FGBC World Facebook page.