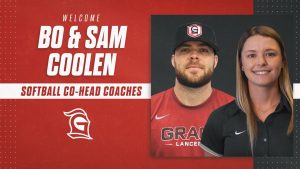 Grace College is pleased to announce the hiring of Bo Coolen and Sam Coolen to be the co-head coaches for the softball program.

“We are very excited for Bo and Sam to join our family at Grace. They have a desire to impact lives for Christ through their coaching while building a strong culture of excellence,” said Grace Director of Athletics Chad Briscoe. “Their extensive background and experience at the NAIA level will serve them well as they take over at Grace. We look forward to their leadership and impact both on and off the field as they lead the program.”

The duo boast a distinguished softball lineage. Bo is the son of Bob Coolen, who has been the softball head coach at the University of Hawaii for 30 years.

Bo enjoyed tremendous success collegiately as a baseball player, first signing to play at Pepperdine University before later transferring to Ohio State. Bo played two seasons as a Buckeye, was a two-time Scholar-Athlete and helped the team to the East Carolina Regional.

Bo was an assistant baseball coach at Vanguard University after graduating from Ohio State. For the past two years he has been the senior associate head coach for Westcliff’s baseball squad. In his first season he helped lead the Warriors to a 19-8 record before COVID cut the year short.

“Sam and I are extremely blessed that God has given us this opportunity, and we are excited to join the Grace College family,” Bo said. “We are looking forward to leading Grace softball and would like to thank President Katip and Coach Briscoe for having faith in us. We are excited to call Winona Lake our new home and are ready to get to work!”

Sam graduated from Vanguard in 2019 where she enjoyed an accomplished playing career. She was a two-time NAIA All-American and a three-time All-Conference honoree. She was named the 2019 conference Player of the Year and was also Vanguard’s Female Athlete of the Year.

Sam spent the past two seasons helping direct Westcliff in its inaugural seasons as a varsity program.

The Coolens will assume guidance of the Lady Lancers, who compete in the Crossroads League. Grace just concluded its second full season at the renovated Coach Phil Dick Field. – from gclancers.com