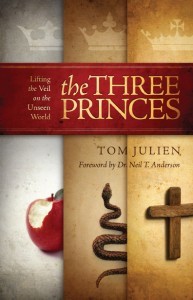 An important new book on the unseen world purports that throughout history, three princes have exercised authority over the earth. The three princes–Adam, Satan, and Jesus Christ–are discussed in detail in The Three Princes: Lifting the Veil on the Unseen World by missionary statesman Tom Julien.

Skillfully combining scriptural teaching with his own experience as a cross-cultural missionary leader, Julien portrays the short rule of the first prince, Adam, and then graphically unfolds how Satan, as the second prince, stole Adam’s authority but ultimately is defeated through the triumph of the third prince, Jesus Christ, who became a man in order to win back what the first man had lost.

Tom Julien is a graduate of Bob Jones University and Grace Theological Seminary. With his late wife, Doris, he served as a missionary in France for 28 years, during which time the Juliens began the ministry of Chateau of Saint Albain, which has become a center for evangelism, training, and church planting. From 1986-2000 Julien was executive director of Grace Brethren International Missions in Winona Lake, Ind. He is currently involved in leadership training, including serving on the staff of his local church. He is the author of a number of books, including the highly-acclaimed missions book, Antioch Revisited, also published by BMH Books.