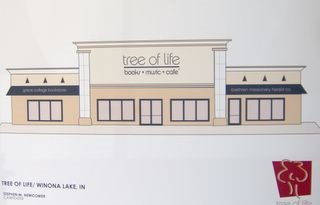 Brethren Missionary Herald Co. of Winona Lake, Indiana, and Tree of Life Bookstores, Inc. of Marion, Indiana, jointly announced on April 5 that they have arrived at an agreement in principle for Tree of Life (TOL) to lease from BMH the 7,500 square-foot facility at 1104 Kings Highway in Winona Lake which formerly housed the Herald Bookstore.

Tree of Life plans to make major renovations to the building and intends to open a full-service Christian bookstore and cafe at the location before classes begin at Grace College and Seminary this fall.

TOL, a privately-owned company, currently operates five bookstore facilities including the campus bookstores at Indiana Wesleyan University, Anderson University, Huntington University, and Grace College. The college bookstore at Grace, currently housed in the lower floor of McClain Hall on the Grace campus, would move to the Kings Highway facility. TOL also operates a free-standing Christian bookstore on Rt. 9 in Marion, Indiana, after which the Winona Lake store will be patterned.

In addition to making cosmetic renovations to the front of the building, TOL also intends to renovate the interior entirely to accommodate a cafe, complete with fireplace, Internet access, and lounging furniture. The store will have a children’s area and will have a conference room available for community use. In addition to college and seminary texts, a full inventory of Christian books and music will be available.

According to Darren Campbell of TOL, the store will have fresh-baked pastries available along with coffee, lattes, cappuccinos, espresso, and other gourmet beverages. The food menu will include soups, salads, and specialty sandwiches and other light fare. The store will be open late each night and Friday nights will feature live music in the cafe area. The store will be closed Sundays.

TOL’s Campbell said, “We know this area well, having vacationed at Lake Tippecanoe for a number of years. We have wanted to open a store in the Winona Lake/Warsaw area and when this facility became available it seemed like a natural.”

Terry White, executive director of Brethren Missionary Herald Co. said, “This is a real answer to prayer for us. Since the BMH building was built in 1956 there has been a continual Christian bookstore operation and we are thoroughly delighted that TOL is continuing that tradition by opening a store that will serve the general public, as well as the academic community, for many years to come.”

Tom Dunn, chief operations officer for Grace College, says, “Tree of Life Coffee Shop and its sister organization in the bookstore have been termed by many of the students as one of the best things that has happened here in several years.”

A number of specialized grand-opening sales and events are being planned for late August.