Dr. Nate Bosch, director of Lilly Lakes & Streams at Grace College, Winona Lake, Ind., reported on the health of Syracuse Lake in northeastern Kosciusko County, Ind., recently at a meeting of property owners and others interested in the lake. His presentation was reported yesterday on the online news site, InkFreeNews. A portion of the story appears below. Click here to read the complete article. 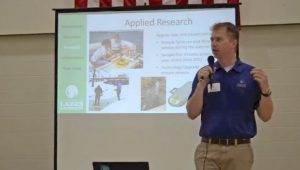 A number of topics were covered Saturday morning, Aug. 3, during the annual Syracuse Lake Association breakfast meeting. The two main topics dealt with the health of the lake and background and information on the formation of Turkey Creek Dam and Dike Conservancy.

Bosch noted Syracuse Lake is clearer than last year with visibility recorded at 12 feet on Syracuse and 6 feet on Wawasee the past week. “The clarity has been consistently increasing over the last three weeks,” he stated. This, he noted , could be due to the cooler temperatures earlier in the season resulting in less boat traffic and colder water temperatures stunting algae growth. It was noted the stream sampling is showing a majority of nutrients are being brought into Wawasee through the four streams, but being filtered before reaching Syracuse. “Wawasee is a filter in a sense for the water as well as Mudd Lake and the wetland areas before it comes into Syracuse Lake,” Bosch noted.

An update on blue-green algae levels was presented. Bosch noted Syracuse has tested on average during the past several weeks at 0.2 ppb with Wawasee at 1.4. “That is well below the threshold,” Bosch stated.