Editor’s Note: Igreja Evangelica dos Irmoes, a Grace Brethren congregation in Uberlandia, Brazil, recently celebrated its 30th anniversary. Several missionaries who served with Grace Brethren International Missions (now Encompass World Partners) and were an integral part of the beginning of the church were invited back for the celebration. 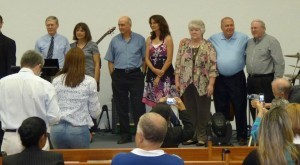 Norm Johnson remembers being approached by a family in his Brazilian neighborhood to pray for a woman who was dying of cancer.

“The priest had been called different times to come, but never appeared. [The sister-in-law] said, ‘I understand that you pray for people,’” recalls Norm, who served with Grace Brethren International Missions (now Encompass World Partners) from 1975 to 1987.

Maria, the patient, was a mother with four young children. Norm prayed with her. He cried out to God throughout the night to not let her die until he had an opportunity share the gospel with her the next morning. God gave that opportunity and she received Christ, complete with a visible joy that came over her. She lived for another five months to be discipled by Barbara Hulse. 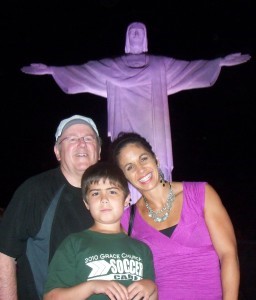 “Most Brazilian funerals were so sad and without hope,” Norm remembers. “How different this funeral was! When Tim Farner and I got to share the hope in Christ, it affected the whole family. Little by little, different family members came to Christ.”

“Two of the daughters [of Maria]…Cris and Karina, are very dedicated followers of Christ. Sebastião Machado (Maria’s brother) is the present pastor of the church. Out the conversion of different family members, a major seed was planted for the future church!”

It was the beginning of a Grace Brethren congregation in Uberlandia, Brazil (Igreja Evangelica dos Irmoes) and this year the church marked its 30th anniversary in May with invitations to former missionaries to help them celebrate.

Johnson and his late wife, Cleo, along with Hulse and Tim and Sandy Farner comprised the first church-planting team at Uberlandia in the mid-1970s. When the Johnsons and the Farners left the field, Dan and Nancy Green stepped in. Today, Bruce and Lisa Triplehorn are the mission staff in Uberlandia.

Returning to Brazil for the week-long celebration was Johnson, along with his daughter and grandson, Heidi and Micah Bogue; the Greens; and the Farners (and their sons, Jonathan and Jay and their families).

“It was a blessing to be included in celebrating with the church. It was wonderful to see the growth in so many of the people with whom we had worked,” says Nancy Green, who served with her husband, Dan, in Brazil from 1982 to 1997. “However, it also weighed on our hearts that there are those who have not followed the same pattern.”

Norm adds, “Word spread that the early missionaries were back and people who were not necessarily part of the church came to see us again! Each night the church was full. One night in particular, about 450 people packed in.

“What an honor and privilege to be a part, not only to relive the special events and people of the past, but to see the present generation’s part and enthusiasm! The services would go a couple hours, but no one was in a hurry to leave. We just shared and laughed, and I could really get an idea what heaven is going to be like!”

Judy Daniels is a freelance writer and former editor of Grace Magazine. She and her husband, Denny, live in Winona Lake, Ind.