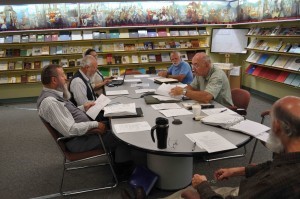 The Brethren Digital Archives Committee met at the Brethren Heritage Center in Brookville, Ohio, on August 1.

The effort to digitize Brethren publications and to make them available on the World Wide Web moved forward on Monday (August 1) as the Brethren Digital Archives committee met in Brookville, Ohio.

The committee includes representatives of groups that trace their spiritual heritage to Alexander Mack and a group of eight believers who were baptized in the Eder River in Schwarzenau, Germany, in 1708.

At Monday’s meeting, the group decided to partner with Lyrasis, the nation’s largest regional membership organization serving libraries and information professionals, to scan more than 26 of the most significant publications, including the Brethren Missionary Herald magazine and Grace Journal and Grace Theological Journal from Grace Theological Seminary. Once scanned, they will be available at no charge in a searchable digital format on archive.org. (Grace Brethren documents will also be available at fgbworld.com.)

The Brethren Missionary Herald magazine was the denominational magazine for the Fellowship of Grace Brethren Churches and was published from 1939 until 1996.

Total cost of this project is estimated at $35,000, but because of a grant that has been received, it is far less than the original $150,000 originally estimated to complete this portion of the project.