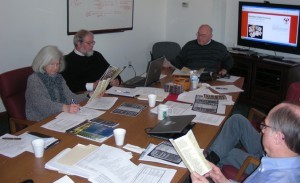 From left to right are Jeanine Wine, of the archives at Manchester College; Jeff Bach, of the Young Center at Elizabethtown College, Larry Heisey, of the Brethren Heritage Center, Eric Bradley, of the Morgan Library, Grace College, (partially visible), and Ken Shaffer, Brethren Historical Archives.

A new website for the Brethren Digital Archives was unveiled Friday, March 5, as the group’s board met in Winona Lake, Ind., for its Spring meeting. The site, meant to gain more visibility for the developing organization, may ultimately be a portal to gaining access to digitized Brethren publications from the late 19th and the 20th Centuries.

The site, found at brethrendigitalarchives.org, was developed by Eric Bradley, a member of the board representing the Morgan Library at Grace College, Winona Lake, Ind. The board also reviewed sample digital scans from several vendors, analyzed quotes for the first phase of the project, reviewed a promotional brochure, and discussed fund raising options.

The group aims to digitize some or all of the periodicals produced from the beginning of publication to the year 2000 by each of the Brethren groups who trace their origin to the baptism near Schwarzenau, Germany in 1708. 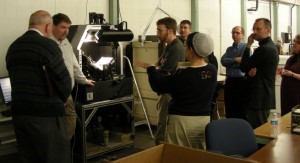 Members of the Brethren Digital Archive Board view a book scanner while touring the HF Group in North Manchester, Ind.