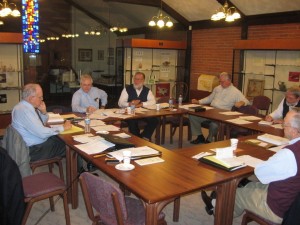 Members of the board of the Brethren Encyclopedia Project met this Monday, October 25 in the archaeology room of Ashland Theological Seminary, Ashland, Ohio, for the BE’s annual fall board meeting.

In addition to routine business such as hearing financial reports and updates from the editor of the Brethren Monograph Series, Dr. Jeffrey Bach, the board also began planning in earnest for the next Brethren World Assembly, to be held in the Brookville, Ohio, area in late July or early August of 2013. Robert Alley, current moderator of the Church of the Brethren, will be the program chair for the 2013 assembly. This will be the fifth Brethren world assembly–the fourth was held in Schwarzenau, Germany, on the 300th anniversary of the founding of the Brethren by Alexander Mack in 1708. In addition, the board voted to send a monetary gift of encouragement to the newly-launched Brethren Digital Archives project which is seeking to turn all existing Brethren historical publications into online searchable databases.

The group also saw an illustrated report and update on the campaign to preserve and restore the homestead of John Kline in Broadway, Virginia. Kline (1797-1864) was a farmer-preacher who devoted his entire life to Brethren causes, served as a horseback missionary throughout Virginia, and spoke out courageously against slavery and the Civil War.

In 1862, Kline was arrested for his advocacy of non-resisters, and two years later irregular soldiers ambushed and assassinated him, making Kline one of the first American martyrs for the Brethren faith.

Kline constructed the Broadway house in 1822, and the building remains in excellent condition, but is being threatened by commercial development on adjoining properties. The John Kline Homestead Trust is seeking to purchase the John Kline Homestead, restore it, and provide an endowment for maintenace. The total cost of the two phases of the project is $1.125 million. Additional information is availabe by writing to John Kline Homestead Trust, PO Box 274, Broadway, VA 22815 or by e-mailing Pastor Paul Roth at proth@eagles.bridgewater.edu.