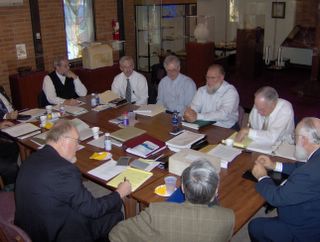 Members of the Brethren Encyclopedia Board, comprised of representatives from six Brethren groups tracing their common heritage to Alexander Mack in 1708, met Monday at Ashland Seminary.

Among the agenda items discussed were the completion of volume 4 of the Brethren Encyclopedia, other monograph manuscripts being considered for publication, and plans for the 300th anniversary celebration in 2008 of the “birth of the Brethren movement” in Schwarzenau, Germany.

The first three volumes of the encyclopedia are now available, and volume 4 has been delayed several months due to the recent sudden death of the co-editor, Dr. Donald Durnbaugh. Dr. Dale Ulrich (second from right, in white shirt) will complete the editing.

For further information, and to purchase any of the Brethren Encyclopedia products, log on to www.brethrenencyclopedia.org.