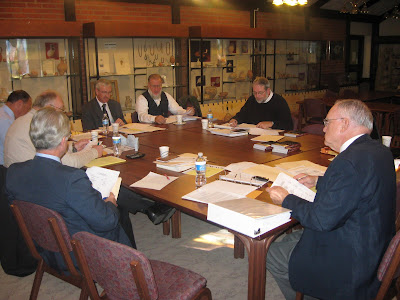 Members of the Brethren Encyclopedia Board are meeting today in the archaeology room of Ashland Seminary in Ashland, Ohio, to process reports, finances, and reflections from the BE-sponsored 300th anniversary celebration that took place in Schwarzenau, Germany, August 2 and 3, 2008.

Ronald Lutz of Ambler, Penna., is retiring after more than 35 years of service as assistant treasurer, and Wayne Guyer of Woodbury, Pennsylvania, will be succeeding him. William Eberly of North Manchester, Indiana, is also retiring as editor of the monograph series, to be succeeded by Jeffrey Bach of the Young Center for Anabaptist and Pietistic Studies at Elizabethtown College in Elizabethtown, Penna.

A newly-created monograph (The Origin of the Schwarzenau Brethren) and a two-DVD series entitled “Back to Schwarzenau” chronicling the 300th anniversary celebration are now available through the Brethren Encyclopedia project.

The current website is www.brethrenencyclopedia.org, and a newly-designed and updated website, offering all BE products, will be online in a few weeks.