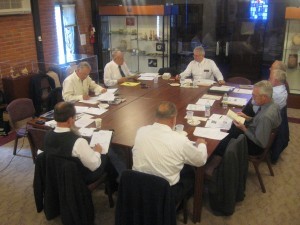 The Brethren Encyclopedia Project board met this Monday, October 15, in the archaeology room of Ashland Theological Seminary in Ashland Ohio. The group is comprised of representatives of the eight Brethren groups descended from Alexander Mack in 1708.

One of the current items the board is discussing is its sponsorship of the Fifth Brethren World Assembly, to be held in the Brookville, Ohio, area the dates of July 11-14, 2013. All Brethren are invited to attend the sessions, which will be held at the Brethren Heritage Center in Brookville and several area churches, including rhe Brookville Grace Brethren Church.

The program committee for the Assembly will meet next Monday, October 22, under the leadership of its general chair, Robert Alley, immediate past moderator of the Church of the Brethren. Be watching for more specific registration information about the upcoming Assembly.