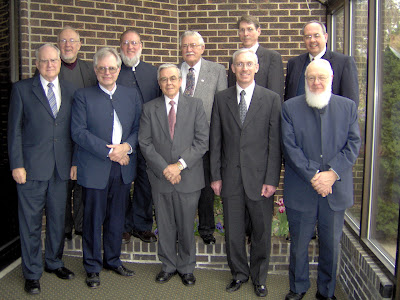 The Board of Directors of the Brethren Encyclopedia and the board associates met yesterday in the archaeology room of Ashland Theological Seminary in Ashland, Ohio, to conduct the board’s spring business and to firm up joint plans for the 300th anniversary of the founding of the Brethren movement, to be celebrated in Schwarzenau, Germany, in early August, 2008.

The Brethren Encyclopedia Project is comprised of members from six Brethren groups descended from the original believer’s baptism performed by Alexander Mack in the Eder River in Schwarzenau in 1708.

Information regarding the FGBC-sponsored historical tour to Schwarzenau and other European missionary sites will be available by this year’s national conference, Equip07, in late July.

More information on the project is available at www.brethrenencyclopedia.org.