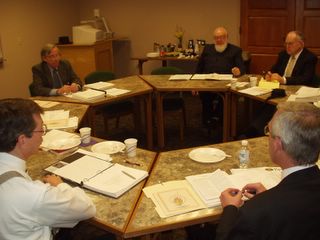 Members of the Board of Directors of the Brethren Encyclopedia Project, representing six branches of Brethren groups tracing their heritage to Alexander Mack, met today at Ashland (OH) Seminary for their semi-annual meeting.

The group has been active since 1978, and in 1983 published the first three volumes of “The Brethren Encyclopedia,” a huge reference work representing thousands of hours of research and editing. The fourth volume is scheduled to appear late in 2005.

The late Charles W. Turner, former executive director of the Brethren Missionary Herald Co., was a member of the board for many years and was honored by the passing of a resolution in his honor today. Terry White, current executive director of BMH, was elected to represent the FGBC in Turner’s place. Among the items of discussion were tours and events to honor the 300th anniversary of the founding of the Brethren movement, which will occur in 2008.

Further information and Encyclopedia products may be viewed at www.brethrenencyclopedia.org.