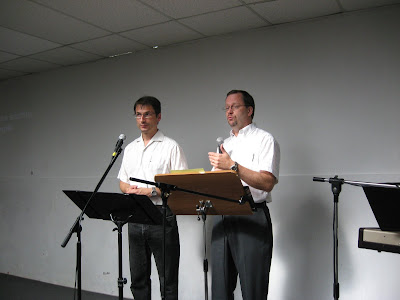 YIB (Your Intrepid Blogger) has concluded the CHARIS experience in Frankfurt, Germany, and is now in France. Dave and Sue Guiles and I took a patchwork of trains, Paris subways, and other means to cross over into France and re-join the Brethren Heritage Tour Saturday night in Lyon, France.

Sunday morning we attended the Lyon Grace Brethren Church, which is the largest and best-developed of the six functioning Grace Brethren churches in France. Pastor Florent Varak (left) interpreted as Dave Guiles (right) of Grace Brethren International Missions, gave a brief report on the CHARIS experience. Varak also translated as Pastor David Plaster of the Worthington, Ohio, Grace Brethren Church brought the morning message, based on the passage in Luke 14 which Alexander Mack and his seven believer friends read before they “counted the cost” and baptized each other in the Eder River at Schwarzenau, Germany, that early August Sunday morning in 1708.

The remainder of the day was spent touring Lyon, which has historic Roman ruins and quite an interesting history relating to the birth and growth of Christianity. Late in the day the group bussed to St. Albain, to the Chateau there.