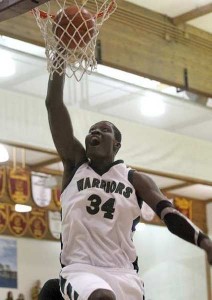 Less than 24 hours after arguably his most agonizing loss at UC Irvine, Anteaters men’s basketball coach Russell Turner was uplifted Wednesday when Mamadou Ndiaye, a 7-foot-5 senior center at Brethren Christian High in Huntington Beach, signed a national letter of intent to play at UCI.

Ndiaye, for whom some have projected an NBA future and has been mentioned as a potential lottery pick, averaged 24 points, 13.9 rebounds, five blocks and 3.8 turnovers as a junior, when he helped the Warriors finish 24-6 and reach the quarterfinals of the CIF Southern Section 5-AA Division playoffs.

Ndiaye, who was brought to America from Senegal in 2010, is believed to be the tallest high school player in the world.

Ndiaye signed in a ceremony at Brethren Christian Wednesday.