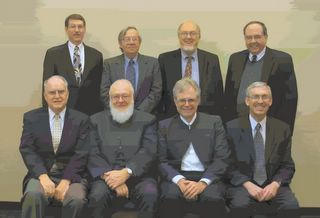 Noted Brethren historian and Brethren Encyclopedia Board member Donald F. Durnbaugh (pictured here, back row, second from left in the Brethren Encyclopia Board) passed away this morning in a Newark, NJ, hospital. He was not feeling well so he and his wife, Hedda, hurriedly returned home from Europe.

Donald Durnbaugh was a noted historian of Anabaptist and Pietist religions. Durnbaugh has published more than 200 articles, reviews and essays on the history of the Brethren Church as well as other Anabaptist religious movements.

He has written or edited 16 books. Some of the books he has written include “Fruit of the Vine: A History of the Brethren” and “The Believer’s Church: The History and Character of Radical Protestantism.” He also edited “The Brethren in Colonial America.”

Durnbaugh started his academic career at Juniata College in Pennsylvania as an assistant professor of history from 1958 to 1962. He left Juniata to become associate professor of church history at Bethany Theological Seminary from 1962 to 1988. In 1988, he returned to Juniata College for a one-year assignment as J. Omar Good Professor of Religion.

He served as professor of history and religion at Elizabethtown College from 1989 until retiring in 1993. He has served as Juniata’s archivist since 1993.

Durnbaugh has received the Manchester College Alumni Award in 1978 and received an honorary doctor of humane letters degree from the college in 1980.

He was awarded an honorary doctorate by Juniata College in 2003, and according to a news release distributed by Juniata at that time, Durnbaugh received the Colonial History Award from the Colonial Society of Pennsylvania in 1957. He was named a Distinguished Scholar by the Communal Studies Association in 2002.

He was an active member of a number of professional orgainzations, including the American Society of Church History, the Brethren Journal Association, the Communal Studies Association, the Pennsylvania German Society, the Society of German-American Studies and the Huntingdon County Historical Society.

Durnbaugh lived near Raystown Lake with his wife, Hedwig. The couple has three children, Paul Berger-Durnbaugh, a teacher at Madison High School in Madison, Wis.; Christopher Raschka, an artist and author of children’s books; and Renate Durnbaugh, who works at the Chicago Reader.

The Brethren Encyclopedia was incorporated in 1978 , and Donald F. Durnbaugh was unanimously chosen to serve as editor. With Bethany Theological Seminary as the center of activity to collect and edit vast historic information about the Brethren from their beginning in 1708 up until 1980, the work progressed smoothly and resulted in publication in 1983-84 of the highly acclaimed The Brethren Encyclopedia, Volumes 1-3.

Nearly twenty years after publication of Volumes 1-3, the Board of Directors decided to publish Volume 4 of the Brethren Encyclopedia with Donald F. Durnbaugh and Dale V. Ulrich serving as co-editors and Carl Bowman as contributing editor.

When published in late 2005 or early 2006, Volume 4 will contain updated information on the Brethren from 1980 to 1995, a comprehensive index covering all four volumes, and additions and corrections to Volumes 1-3.

The Brethren Encyclopedia Project includes representatives of six Brethren groups. The Fellowship of Grace Brethren Churches is represented by Terry White of the Brethren Missionary Herald Co. His predecessor, Charles W. Turner, served on the encyclopedia board for several decades prior to his death this past November. For more information log onto www.brethrenencyclopedia.org.