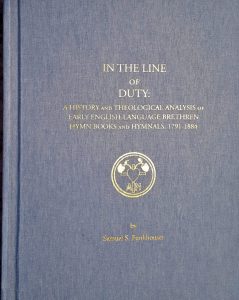 A new monograph by Samuel Funkhouser, In the Line of Duty: A History and Theological Analysis of early English-Language Brethren Hymn Books and Hymnals, 1791-1884, is now available from the Brethren Encyclopedia, Inc.

In the Line of Duty tells the story of how the hymn writers of the English evangelical tradition and, later, revivalism, transformed not only the hymnody but also the devotional and thought world of the Brethren during the nineteenth century. Funkhouser likewise provides a thorough description of each of the English hymnbooks and hymnals produced between 1791 and 1884, including the works authorized by the Old German Baptist Brethren and The Brethren Church after the divisions of the early 1880s.

Thirty-five years ago, Hedwig (Hedda) Durnbaugh’s The German Hymnody of the Brethren, 1720-1903 appeared as the first work in the Monograph Series published by Brethren Encyclopedia. Her ground-breaking research shed new light on the German hymnic tradition of the Brethren, that heavily depended on the Pietist movement as its inspiration.

An entirely new hymnic tradition became the wellspring for the hymnbooks that appeared in English in the late 1700s and gradually supplanted the German-language hymnbooks by the middle decades of the 1800s. These English hymnbooks drew especially from the rich English evangelical tradition of such people as Isaac Watts, John and Charles Wesley, and John Newton, among others. The Funkhouser volume is a fitting sequel to Durnbaugh’s work.

In his introduction, Funkhouser describes the twofold purpose of his study: “to provide an overview of the background and development of English-language Brethren hymn books and hymnals, and to analyze the various theological and historical developments that have been reflected in, or even precipitated by, these books.” Funkhouser follows the lead of other Brethren writers by distinguishing “hymnbook,” defined as words-only works, from “hymnal,” wedding texts with tunes. Unique features of his work are the exhaustive analysis of the sources that Brethren editors drew upon for their hymnbooks and hymnals and a complete listing, including occurrences, of the hymns in these Brethren works. “In the Line of Duty” is the ninth work produced in the Brethren Encyclopedia’s Monograph Series. 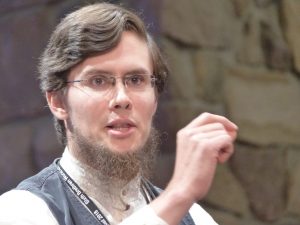 Author Samuel Funkhouser is a member of the Old German Baptist Brethren, New Conference. He is a graduate of James Madison University and Princeton Theological Seminary (M.Div.), where he wrote a thesis on the theology of early English-language Brethren Hymnody. He currently serves as the executive director of the Brethren and Mennonite Heritage Center in Harrisonburg, Va.