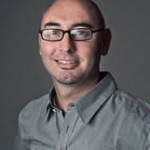 Brian was on staff at Community Grace Brethren Church in West Milton, Ohio, for 11 years. He still lives in the Dayton area with his wife, Jenna, and their three boys. Brian began with Outreach in 2010 as founding editor of churchleaders.com.

Also associated with Outreach Magazine is former CE National employee, James Long. Jim and his wife, Harriet, were from California and attended Biola University. Jim then became a writer and editor of various books and publications. He is now managing editor of Outreach Magazine overseeing the production and content of the magazine.