Brian Winter Sworn in as Sheriff in Yakima County, Wash. 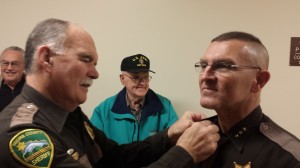 Former Grace Brethren pastor, Chuck Winter, sent along this photo of his son, Brian, being sworn in as the sheriff of Yakima County, Wash. Brian, who has 23 years experience as a sheriff’s deputy, was elected in November. (See related story.)

Chuck, who pastored the Grace Brethren Church in Harrah, Wash., for 25 years, writes: “Attaching a photo of our oldest son, Brian M. Winter, having the four stars pinned on by outgoing Sheriff Ken Irwin in swearing in ceremonies yesterday at the Yakima County Courthouse. Ill health prevented me from being there but I had glowing reports and photos – from family, Pastor Peter Touhey (Harrah GBC) and Ken Ruppert, recently appointed Elder at the Sunnyside GBC. Ken was going to take me up, but when I couldn’t make it he went on his own.”

Chuck and his wife, Marilyn, now live in Sunnyside, Wash.