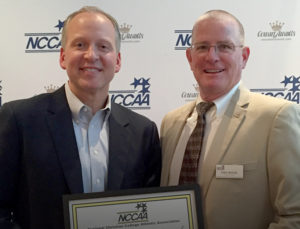 Grace College Director of Athletics Chad Briscoe was recently recognized for his service to the NCCAA.

During the NCCAA’s Annual Convention in Louisville, Briscoe was given the Meritorious Service Award. He served as the NCCAA Division I Men’s Basketball National Chair for three years (2014-17), overseeing the men’s basketball coaches at the NCCAA level.

Additionally, at the convention, Briscoe was elected as the second vice president of the NCCAA. He was elected by members of the association and will perform the role in addition to his day-to-day duties as athletic director at Grace College.

“I am honored to serve the NCCAA for the next nine years in this capacity,” Briscoe said. “I would like to thank Dr. Bill Katip (Grace College President) for allowing me to be considered for this position. I look forward to serving alongside the strong leadership within the NCCAA and Board of Directors in order to further the intentional Christ-centered mission of the NCCAA.”

“Chad brings an accomplished level of administration and professionalism to the NCCAA leadership team that will serve us well as we wrestle with the difficult decisions facing our membership,” said NCCAA Executive Director Dan Wood. “However, his commitment to the mission of the NCCAA and all of Christian higher education is what excites me the most.”