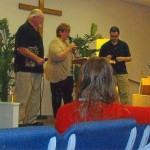 The Kevin Donohue Trio provided special music for the 40th anniversary celebration at the Grace Brethren Church in Brooksville, Fla. 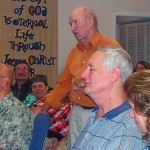 Herb Shallcross gives the history of the Brooksville church, which began in 1974. 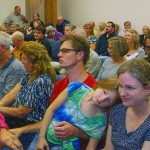 Part of the gathering for the 40th anniversary celebration at the Grace Brethren Church, Brooksville, Fla. (Bill Smith, pastor). 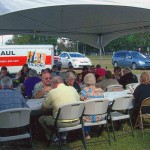 So many people attended the anniversary dinner, that an overflow tent was set up outside the church.

In the first part of the 1970’s, Pastor Herman Koontz began traveling from Deltona, Fla., to Brooksville to conduct a Bible Study with two Grace Brethren families in the area – the Herb Shalcrosses and Larry Wentzes. After several years the group had increased to 15 in attendance. Pastor Koontz encouraged them to apply to Grace Brethren Home Missions for recognition and support. The group was accepted and was followed by an organizational meeting in 1974, with Ed Lewis, Sr. and Herman Koontz.

Rev. William Willard was called as the first Pastor. The Grace Brethren Investment Foundation loaned the money for the construction of a building located on St. Rd. 50.

Check out the #throwbackThursday photo on today’s Facebook/GraceConnectus. It’s an image of the Brooksville congregation from the December, 1981, Brethren Missionary Herald magazine. They had recently moved into their new building.