Former Grace Brethren pastor Earl “Buck” Summers, now a consultant, speaker and counselor in the Chambersburg, Pa., area, was in the crowd the day Wilt Chamberlain scored his historic 100 points. Here is an excerpt from a Chambersburg newspaper article retrospective. To read the original, click here.

But, the afterglow of Wilt Chamberlain’s 100-point night at the Hershey Sports Arena (now Hersheypark Arena) has lingered for one former Waynesboro resident. 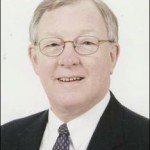 Buck Summers, a 1960 Waynesboro Area Senior High School graduate, was a 19-year-old assistant circulation manager at The Record Herald. The circulation manager at the time was Carroll Hartle. The department ran a promotion for its Greencastle paper carriers, with the winners being awarded with a trip to Hershey to see the Philadelphia Warriors play the New York Knicks in a National Basketball Association game.

“We were anxious to see our first professional game,” Summers said. “We sat on seats above the playing floor, but toward the end of the game, due to the amount of spectators, we were able to move to seats at one end of the court.

“Two boys won the contest. The four of us traveled to Hershey on a cold, wintry evening to see the professional basketball game. I think there was snow on the ground.”

Arguably, none of the 4,124 spectators who attended the game knew they were about to witness a record being broken — one that still stands today.

“Absolutely not,” Summers said of the expectations surrounding the late-season game. “It was a small crowd. It was the first pro game we’d ever seen.”